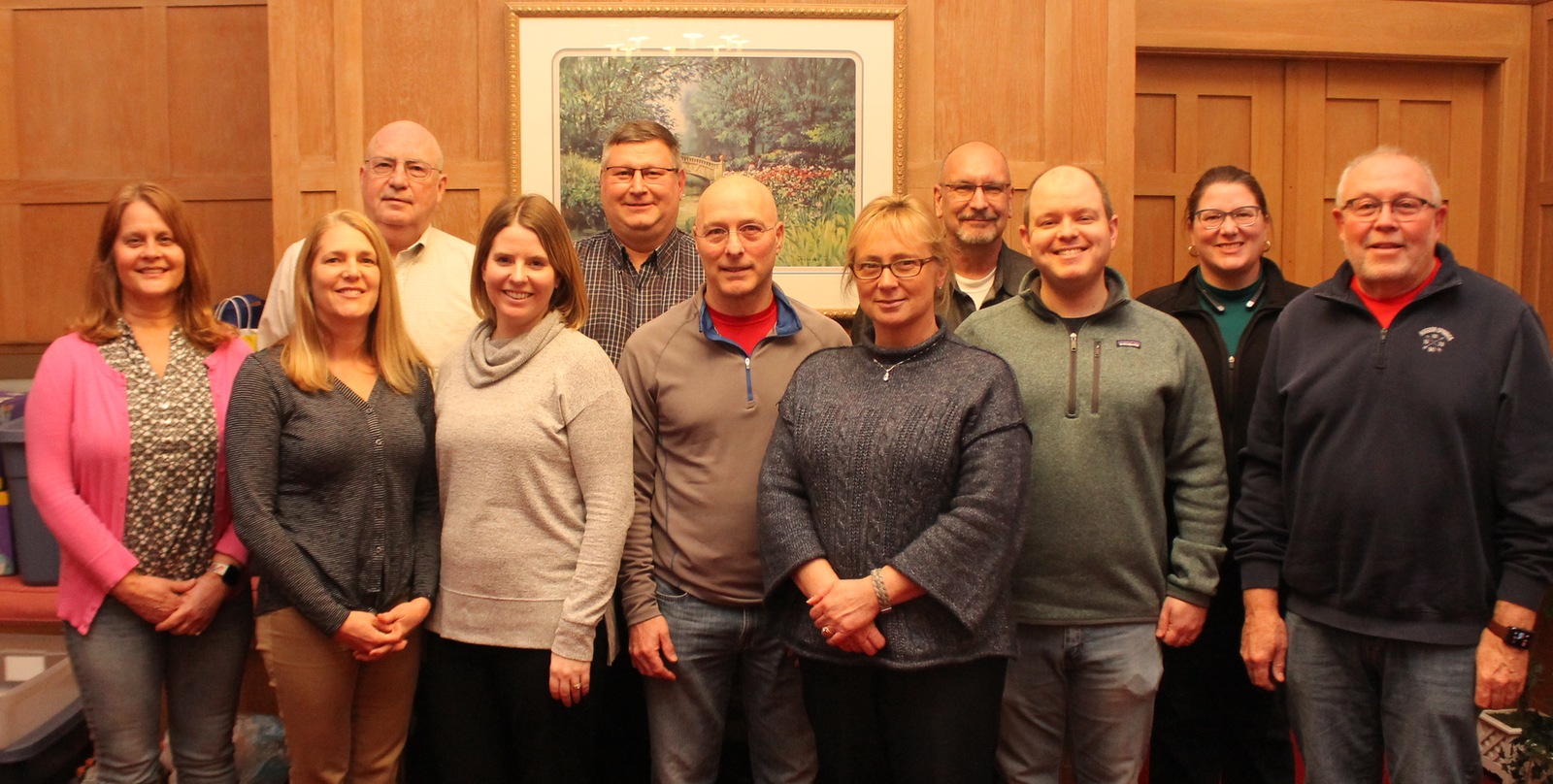 Good morning and thank you for joining us at this important meeting.  An interim Annual Meeting is unprecedented but, then, 2020 has largely strayed from anything we might call typical.  I hope and pray you, your families, your friends, and your loved ones are all safe and well.

We should begin by acknowledging and thanking Paul, Jennifer, Jane, Brad and all of the folks who worked so hard to create the excellent online version of St. Paul’s we see not only each Sunday but throughout the week.  I do not know where we would be without their leadership and creativity.  I would also like to highlight the excellent work of our office staff and Vestry for navigating St. Paul’s through the first half of 2020.  Without the foundation created by all of these people—on the program side and from parish operations—I am confident the budget we’re presenting at this meeting would fall short of both our spiritual and financial goals.

Before we discuss the present and the future, let’s recall what brought us here—to an interim annual meeting.  Vestry, the Stewardship Committee, and the Finance Committee last fall began a two-pronged campaign—to increase pledging by highlighting the church’s outstanding programming while analyzing the budget for potential savings.  The campaign bore fruit as pledging increased heading into 2020.  However, anticipated expenses still outstripped revenue and Vestry resolved not to engage in the type of transfer from the Operating Endowment that had occurred in the preceding years.  As a result, Vestry made painful cuts to the budget, particularly in the area of clerical and support staff.  The Building Manager position was eliminated and the parish secretary was ultimately reduced from full time to a part-time 20 hour per week position.

When we met as a parish on January 19, 2020 for the Annual Meeting, Vestry chose to present a six month budget.  Even with the significant cuts to staff and program expenses, Vestry still anticipated a draw of over $90,000 from the Operating Endowment to balance the 2020 budget.  Vestry found this result to be unacceptable and presented the parish with this reality: without increased giving, more and deeper cuts would necessarily follow.

I am very proud to report the overwhelming response from St. Paul’s raised more than $47,000 in new pledges and gifts. With the increased support and additional cuts, Vestry drafted a budget which anticipated roughly a $27,000 transfer from the Operating Endowment.  While not perfect, such a transfer would have amounted to significant progress toward Vestry’s—and the parish’s—goal of relying less on the Operating Endowment and more on parish pledging and gifts to support the ministries and programs which are so important to all of us.  As the numbers have come in over the first part of 2020, the anticipated withdrawal from the Operating Endowment is set to be around $11,000.

St. Paul’s has seven endowments and several restricted investment funds.  Many of you are rather familiar with these funds but, for the sake of context, we ought to make a quick note about how they work.  As Paul says, we have three types of endowments—some help people in need, some are dedicated to the building and grounds, and one—the Operating Endowment—was established to support the church’s budget.  With the notable exception of the Operating Endowment, each of the endowments is restricted to varying degrees.  Vestry and its committees have the documents which establish the accounts and abide very strictly by all restrictions as many of you who have served on Vestry know quite well.  I want to be abundantly clear in this point: Vestry has always and will always follow all donor restrictions on any fund.  Vestry, not only as stewards of the funds but as your fellow parishioners, has and will continue to endeavor to maintain St. Paul’s while working to provide support for the future.

On December 31, 2019, the balance of the Operating Endowment was $389,725.53.  On June 30, 2020, the balance was $499,508.09.  In six months, the Operating Endowment has grown by 28%.  This increase can be traced directly back to the budget cuts implement by Vestry but, more importantly, to the parish’s increased giving.  I am very proud to be able to report this number to you.  It should be noted this balance includes an interim transfer of $60,000 for cash flow purposes a couple months ago but it is anticipated that, as long as pledging remains steady for the remainder of the year, that money will be returned to the Operating Endowment.

Superimposed over this discussion—as it is with all else—is COVID-19.  By the middle of March it was clear 2020 would not be the year anyone anticipated.  Vestry leadership and the Chancellor spent many hours on Zoom calls with the diocese and in parish meetings in an attempt to determine what worship at St. Paul’s would look like and how we would fund it.  As those weeks unfolded, Congress wrote the CARES Act—the largest of the COVID-19 recovery bills—and included provisions to help non-profits and churches.  These entities, which are tax exempt, typically do not qualify for unemployment benefits, for example.  The CARES Act changed that with respect to COVID-19.  The CARES Act also included a payroll support loan program called PPP.  Recipients of such loans who use the funds for payroll support and some overhead expenses are eligible to have the loan forgiven.  On the advice of the diocese and in consultation with parish leadership, St. Paul’s applied for and received a PPP loan of around $59,000 at Eastertime.

The diocese recommended all churches apply rather than exhaust endowed funds.  To date, the pledging at St. Paul’s has not suffered and we are truly blessed by this as a parish as it is a sign of the relative health and success of our parishioners.  However, as you can see from my mask, the pandemic is hardly over and we do not know what the second half of 2020 will bring to any of us.  St. Paul’s used the PPP funds for payroll as required by the CARES Act and anticipates forgiveness of the loan.

Once forgiven, the current budget becomes a surplus budget of around $40,000.  Think about that.  In January, Vestry anticipated a budget deficit of $90,000 and now projected a surplus of around $40,000 with a growing Operating Endowment.  That $130,000 swing is due in large part to the parish’s increased giving.  Of course, nothing is certain.  If pledging slips in the back half of the year, the projected surplus may decrease or even vanish.  For this reason, it is imperative we all maintain the spiritual discipline of pledging each week or month to sustain the hard work we’ve all put in to making the current budget possible.

Even though the path to get to today as been long and winding, our business today is straightforward.  Vestry asks that the church accept its recommendation and pass the proposed budget for the remainder of 2020.  I know there are—rightly—deeply held feeling about past transfers from the Operating Endowment.  As shown, though, there is no anticipated transfer this year.  Even with the PPP funds, an $11,000 transfer would have been entirely manageable, sustainable, and reasonable.  With this in mind, Mark and I are here to answer any questions about the budget and to entertain a second on Vestry’s motion to pass the proposed budget. 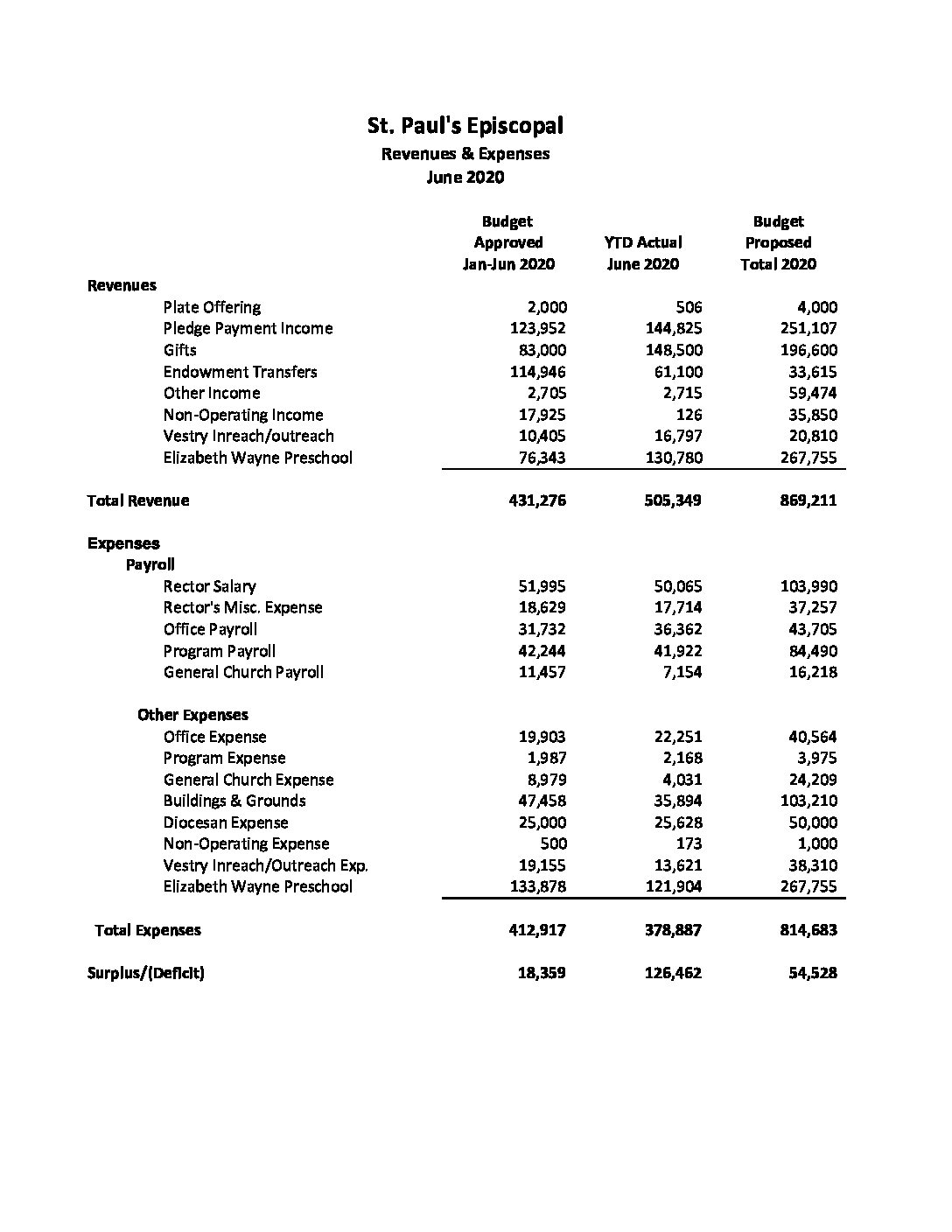