This past July, I was given a new job – Director of Christian Formation – and given the task of articulating what that means. How do we form faith, or live a life of discipleship?  How do we authentically reach out to our community?  Individual meetings, group meetings, networking, and discerning the call of the Spirit have followed, along with a lot of prayer and awe at the possibilities and responsibility involved.  During brainstorming sessions of the Outreach Committee, three initiatives rose to the top as first priorities:

With the first Community Meal fresh in my mind, I’d like to share a few stories and reflections from this foray into kingdom-building. 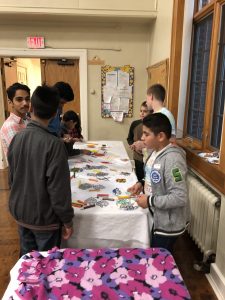 The Community Meal was one of many ideas that I tossed out to a group of people interested in Outreach, and given many participants’ interest in hospitality and forming relationships, it was named a priority.  The premise behind the meal is much more than simply feeding stomachs, even hungry stomachs (though of course that is also a priority).  The purpose of the meals is to stretch ourselves, to step out of our comfort zones, to incarnate God’s radical love for all, and to come close to people with whom we don’t often find ourselves in relationship.  We cannot incarnate love from a distance; we need to look into people’s eyes, touch people’s hands, and engage in personal conversation.  I could not think of a better focal point than a meal to serve as a vehicle for coming close to others.  Not only are meals central to Jesus’ own ministry (think of the many different groups and people he chose to eat with, much to the horror of the religious leaders and even sometimes his friends), but our central organizing sacrament is also the Eucharist, the table around which we gather every week in worship.  Table theology is profound.  At God’s table, there is always enough; all are welcome and have a place just for them; and Jesus promises to be with us in the breaking of bread.  What better avenue could there be for gathering with God’s beloved?  What better way to be conduits of God’s grace than by extending warm meal hospitality?

So we planned, and fretted, and carried out our first meal.  To get things rolling, we decided first to invite folks with whom we already had relationships: a Muslim-Christian dialogue group of which a handful of parishioners are members.  Then, to increase the numbers, we also invited refugee families, much as we had done for our Refugee Welcome Party back in the spring.  (We also will invite UOR food pantry recipients and preschool families to attend every month!)  Because many invited guests were Muslim, this meant our first meal needed to be halal, so our first act of hospitality was researching food practices.  Then there was the question of prayer: how to pray in a group of Christians, Muslims, and secular folks?  (Keep it simple was the advice I was given!)  How would we communicate with people who only spoke Arabic (translators from US Together) or Spanish (Michele Alexander and the wonders of Google Translate!)?  Would the fall activities be interesting to the group?  How would we make sure people mingled with others they didn’t know?  Would any of this even matter?  What difference could one meal possibly make in a polarized world? 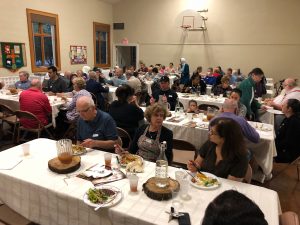 Perhaps the best way to see the difference is to look at the pictures.  83 people were willing to take this chance at building community.  There were smiles, laughter, and lots of conversation.  Children swarmed the art tables, youth of all backgrounds played games together, adults networked, refugees shared their stories and pictures of family.  There was an atmosphere of respect and love and grace.  One of our parishioners went to the east side of Toledo and picked up two middle-aged men from Cuba whom she’d never met, and she did so with boldness and grace.  A participant in the Muslim-Christian dialogue group who owns a kitchenware business offered to donate 9 dozen new coffee cups to replace our older cups – not out of pity, or because he thought we were in need, but out of a gracious and generous spirituality that identifies what gifts one has to offer and then offers them freely.  Giving is a central pillar of Islam, and it is awe-inspiring to watch devout Muslims give sacrificially.  A parishioner talked about the dinner idea with his son, who then asked for more information about how it was organized so that he could initiate a similar meal at his church.  Another parishioner said that the event was uplifting for her spirit.  One Muslim dialogue group participant said that she felt comfortable bringing her friends to our event because she knew that St. Paul’s was a warm and accepting place and that they were safe with us.  A refugee who is having trouble finding suitable work networked around the room, seeking opportunities to find a position that pays a living wage so that he can support his family.  The extra food from the dinner was sent home with refugees and Monday’s food pantry recipients.  There were so many hearts touched by this one simple meal. 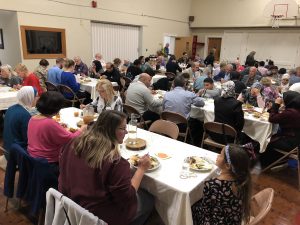 These are just some of the stories, but they demonstrate something important – the ripples.  When we take a step forward into building God’s kingdom, it feels like the smallest of steps, and we take it trepidatiously – what if we make a mistake and offend someone?  What if we’re just wasting our time?  But just like throwing a pebble in the lake doesn’t seem like a significant act, the ripples can spread in ways we don’t anticipate or even discover.  God does not call us to change the world; God calls us to be faithful with what we have.  To change ourselves.  To set a table and welcome all.  When we do that, God is one who multiples the loaves and the fishes.  As we bless bread, break it, and give it, God’s presence in our midst is made known to us — particularly in the faces of others, even those of different faiths or ethnicities.  With every act of love, the kingdom of God becomes more real on earth.

What appeared to be a simple meal had profound impact because God showed up.

Let’s do it again.  Let’s see how God can use us to build the kingdom. 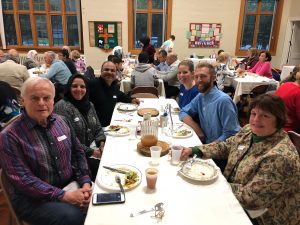