You’re invited to join St. Paul’s Book Club. We meet virtually on the second and fourth Tuesday at 6:30 pm, and we read one book a month from a variety of different genres. You don’t need to join in for every book discussion; we have people who come because they are interested in a particular book. The group is welcoming and lively, and we all enjoy the difference in age, interest, and experiences. For more information please contact Donna Dick.

*Note: We are meeting on the first Tuesday in September instead of the 2nd Tuesday.

In 2010, the Army created Cultural Support Teams, a secret pilot program to insert women alongside Special Operations soldiers battling in Afghanistan. The Army reasoned that women could play a unique role on Special Ops teams: accompanying their male colleagues on raids and, while those soldiers were searching for insurgents, questioning the mothers, sisters, daughters, and wives living at the compound. Their presence had a calming effect on enemy households, but more importantly, the CSTs were able to search adult women for weapons and gather crucial intelligence. They could build relationships– woman to woman –in ways that male soldiers in an Islamic country never could. In Ashley’s War, Gayle Tzemach Lemmon uses on-the-ground reporting and a finely tuned understanding of the complexities of war to tell the story of CST-2, a unit of women hand-picked from the Army to serve in this highly specialized and challenging role. The pioneers of CST-2 proved for the first time, at least to some grizzled Special Operations soldiers, that women might be physically and mentally tough enough to become one of them. The price of this professional acceptance came in personal loss and social isolation: the only people who really understand the women of CST-2 are each other. At the center of this story is a friendship cemented by “Glee,” video games, and the shared perils and seductive powers of up-close combat. At the heart of the team is the tale of a beloved and effective soldier, Ashley White. Much as she did in her bestselling The Dressmaker of Khair Khana, Lemmon transports readers to a world they previously had no idea existed: a community of women called to fulfill the military’s mission to “win hearts and minds” and bound together by danger, valor, and determination. Ashley’s War is a gripping combat narrative and a moving story of friendship–a book that will change the way readers think about war and the meaning of service.

October 11th and 25th – The Night Circus by Erin Morgenstern

The circus arrives without warning. No announcements precede it. It is simply there when yesterday it was not. Within the black-and-white striped canvas, tents is an utterly unique experience full of breathtaking amazements. It is called Le Cirque des Rêves, and it is only open at night.

But behind the scenes, a fierce competition is underway: a duel between two young magicians, Celia and Marco, who have been trained since childhood expressly for this purpose by their mercurial instructors. Unbeknownst to them both, this is a game in which only one can be left standing. Despite the high stakes, Celia and Marco soon tumble headfirst into love, setting off a domino effect of dangerous consequences, and leaving the lives of everyone, from the performers to the patrons, hanging in the balance. 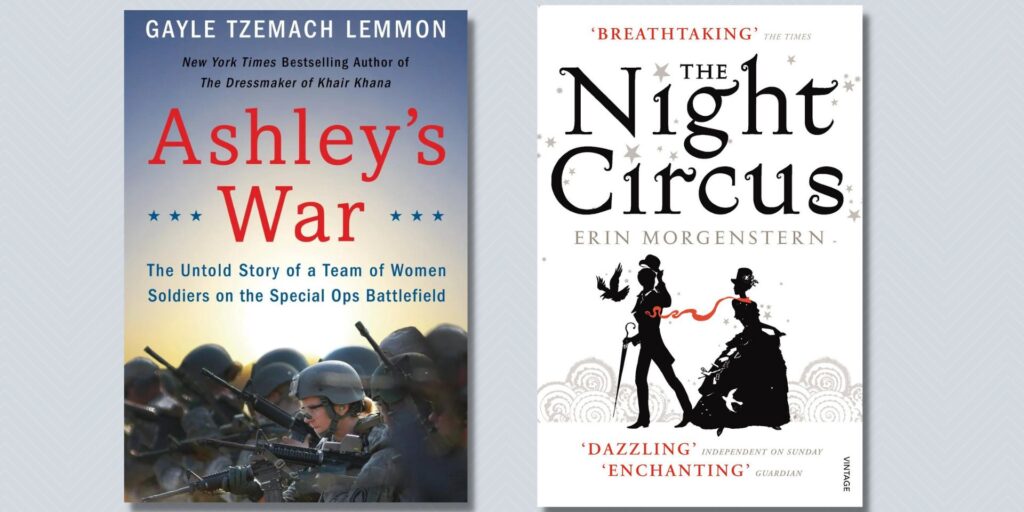