The Pipe Organ is Back! 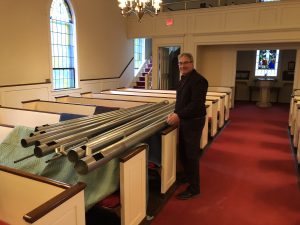 The pipes and console of the newly rebuilt pipe organ are back in the sanctuary!  For six months we have supported congregational singing with the piano while we awaited the organ’s return.  Although my hands have been busy, I am now dusting off my feet, and am preparing to present the newly restored instrument to the congregation. 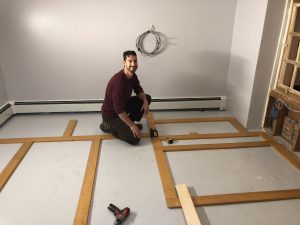 Installation began in mid-October.  The talented builders from the Muller Pipe Organ Company are now making finishing touches on voicing the pipes. Our re-built version is a combination of the old and the new, and blending these sounds together is one of the most important parts of the installation process. One would think that a pipe is a pipe, and can produce only one unvariable sound, but that is not the case.  An example of this is a set of pipes on the old organ called the fagot that was discovered during planning to have originally been an oboe.  It was revoiced to sound like a bassoon back in 1965.  The gentle sound of the oboe has now been restored, and the Mullers have added a much more majestic and useful trumpet to take the place of the fagot. 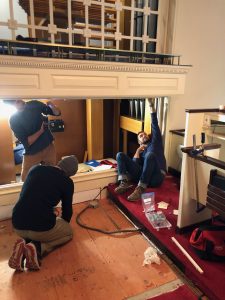 I’ve been asked, “Will I see or hear anything different?”  The answer is a dramatic, YES!  You will see a different pipe presentation in the façade of the chamber.  You will also see more of the newly refinished organ console, and I suppose that means, more of the organist as well.  This is because the console has been raised to match the level of the chancel, allowing easier access, and the ability to move the console for special events.

You will hear new sounds, some soft and gentle, and some more majestic.  The sounds of the two manuals will be better balanced, and the ability to adjust the volume will be improved.  The shrillness of the highest register from the old organ will be gone.  And you will experience the vibrations, more than the sound, of a 32’ pedal rank that produces the lowest tones of the organ.  Paul has described experiencing this when he sees the wine vibrate in the communion cup…certainly a sign of the Holy Spirit reaching out from the organ to the consecrated cup.

In addition to changes in what you see and hear will be the unseen changes that occurred within the pipe chamber.  Temperature and humidity will be much more stable, now that the room has a new heating system and insulation.  This will help maintain the intonation of the organ as the temperature within the chamber will better match the temperature in the sanctuary.  And new baseboard heat will also be more efficient and safer. 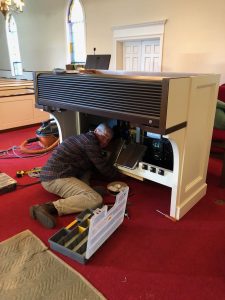 The Muller’s oversite of the new organ will continue as the instrument settles into its improved quarters and begins to stabilize.  I also need a bit of time to adjust to the feel, sounds, and modern technology of this new instrument. We anticipate its Sunday premiere will occur on November 11th with great fanfare!   This will be a Sunday not to miss!

Your patience, as we dealt with the esthetic changes in the sanctuary resulting from the rebuild, has been greatly appreciated, and your support of this project will contribute to beautiful music at St. Paul’s for generations to come.

I look forward to presenting the new sounds of the organ that will encourage our anticipation during Advent and lead us in celebration at Christmas.  Be sure to watch for information about upcoming services and musical events as we celebrate the return of the organ at St. Paul’s!